Restoring one of world’s last surviving Sheffield motorbikes: ‘It’s a piece of history’

The project – funded by mechanical and electrical engineering firm H E Barnes – is being completed by enthusiast Chris Rogers and a group of volunteers.

The Dunelt motorbike was found on a farm in Northern Sweden, where it was believed to lain since before World War Two.

Chris, who was restored dozens of rare bikes over the years, then approached both Kelham Island Museum and HE Barnes about purchasing the bike.

“I got in touch with a man in Sweden who is a world-renowned motorcycle enthusiast,” he said. “About ten years after I called him, out of the blue he contacted me and said ‘Are you still looking for one’. I couldn’t believe it… We don’t know much about it, or who owned it at all. It’s unbelievable that it was even found. I remember the day it came from Sweden in a big box – we opened it very carefully, and there it was.”

The bike – a 1932 V5 with a Sturmey-Archer 600cc sidevalve engine and gearbox – is so scarce, even fanatics may never have heard of it. While a handful of models exist, there is only one other of this particular type known, and Chris’ motor is thought to be the most complete of the two. It is a deluxe variety, with electric miller lights and a chrome tank with two-tone paintwork. It was the largest capacity motorcycle made by Dunelt and was ideal for sidecars.

Steelmakers Dunford & Elliott founded Dunelt, an award-winning marque, in 1919. In 1931, the factory moved from Birmingham to Sheffield; motorcyles were only produced in Sheffield for a couple of years, making it an important find. The range soon reduced dramatically and the last Sheffield-made Dunelt motorcycles came off the production line in 1935. The firm went on to produce outboard motors for boats.

Many Dunelts were exported to Sweden as Dunford & Elliott imported a lot of Swedish iron ore for their steelmaking.

Chris, who lives in Derbyshire just outside Sheffield, knew the motorcycle should be displayed in the city, and made it his mission to have it returned home.

“I initially approached Kelham Island Museum and told them ‘You have to get this’ but sadly they didn’t have the funds. I was very happy when HE Barnes decided to purchase it. I thought it had to come back to Sheffield one way or another. Sheffield is where it should live. It’s a tangible piece of history, whether you’re a motorcycle enthusiast or not.”

Other local businesses are now getting involved in the restoration – people are offering their time as well as parts and equipment.

“The different businesses getting involved is the greatest thing about this project,” said Chris. “They’ve all come to the party and donated lots of different things, not money necessarily. We’ve had T-shirt printers and all sorts helping out.”

The restoration could take up to a year. The idea is to put it on show in the state it was found, then bring it back to Kelham when the project is complete.

Rogers says his ultimate dream would be to get the bike running and take it back to the factory it was made in. The last surviving remnant of the original Attercliffe Dunelt factory is a small section that was the machine and assembly shop.

The bike can be seen at Kelham Island Museum’s Vintage Fayre. 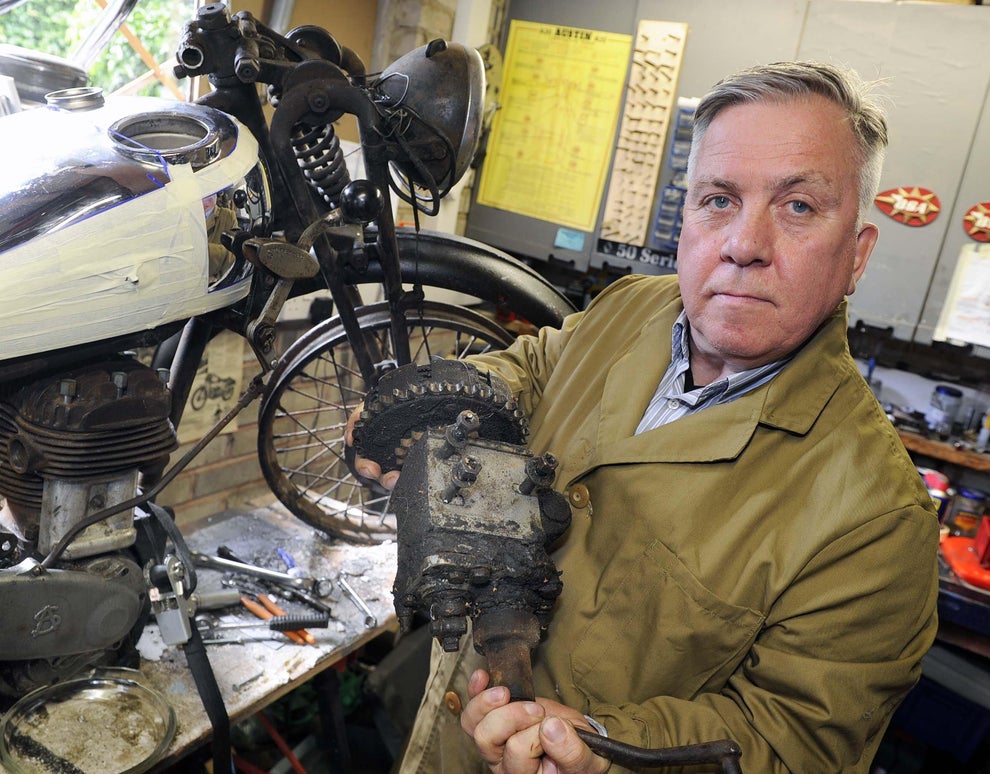